The Inventor of the LuVailean Sonnet

She was no Millay, my Great-Aunt Lucy, but she named herself Lyra LuVaile, Poet Laureate of Long Beach, California, and wrote a book in which she speaks familiarly of Stars, the Cosmos, the Music of the Spheres – subjects I might write about, myself, though not perhaps so familiarly. “The blood of Irish bards runs in our veins!” she cried, upon hearing my baby self rhyme hop and stop. (At which my grandmother whispered in my ear:  “Nonsense. We were Orangemen, my dear.”)

Bony, ax-faced, that long Scotch-Irish nose – her looks from her father, Jeremiah, the old man in the daguerreotype with the rifle and Bible, the waist-length beard and the belt he used to whip them with. All the girls looked like that – collarbones uneasy under the frilly high-necked cambric, layers of ruffles starched to fill out shirtwaist bodices – all except my grandmother, small and dark and buxom. (“I,” she said, “did not need ruffles.”)

But Lucy married at last, and moved out west with her Calvinist husband, crippled in the First War, to Long Beach, California – city of spiritualists and faith healers, health regimens and Sears Roebuck bungalows, where everything that had come a bit loose across the vast prairies rolled until it hit the water’s edge – the LuVailean sonnet, for example, which Lucy at once invented.

There she published her magazine, Aeolian Harp, where poets who wrote of Veils and Starry Orbs and Lyres might (for a fee) send their efforts to be critiqued by the Laureate Herself, and if accepted – which they were, after a few more go-rounds and quite a few more fees – published, to the admiration of their friends.

Well, she was no Millay, my Great-Aunt Lucy, but a woman of parts, commercially speaking. And if she said nothing about her actual life, the four neglected children and the dark mean house, the smell of toilet and unwashed clothes – if she escaped to her druids and nymphs of fairy grace, her cerulean heavens and sapphire seas, who can blame her?

(Except – what of the husband in his wheelchair with his whipping cane? What of the monthly envelopes full of cash, to pay her for the care of her lost sister’s secret child – money that kept a roof over their heads, while day and night the boy was beaten and beaten to drive out his mother’s sin – and herself not stopping it, not speaking a word of love? Lucy, what of that?)

WHALE FALL READING FEBRUARY 2017 Here is Lauren Levine’s documentary about a reading I gave at Poetry Flash in 2017, featuring poems from the “Whale Fall” project I’ve been working on recently. This video shows the beginning and ending poems, plus one example from the central “Slow Worms” section, and a poem about the great…

Reading so many beautiful poems of gratitude and thanks-giving this week, I wanted to share this, from my last book, Crazing: Flotsam The storm drives all ashore—thrown stick with dogteeth, twig of twisted pine, thumbnail jellyfish with dark sails fallen, torn kelp, fouled ballast, soapy olivine foam. Everyone here has the same story. We are… 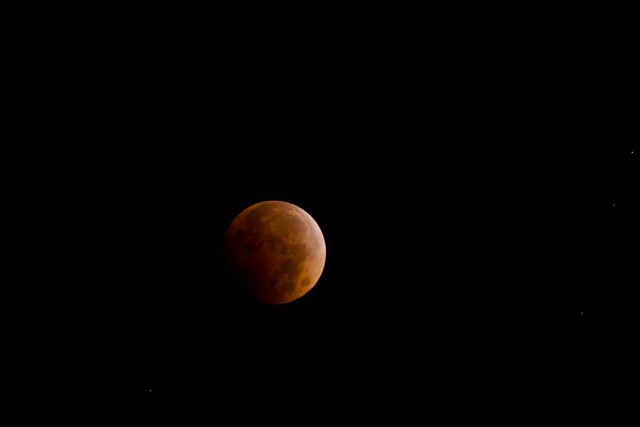 In this moment of equipoise, balance of night and day, we await a full moon lunar eclipse – an eclipse of the deep golden harvest moon, so warm and radiant. I love lunar eclipses, the dark of the moon, the new moon, the winter solstice, all these times of letting go, erasure, darkness and rebirth…. 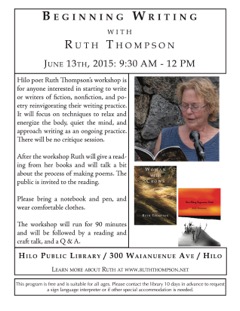 BEGINNING WRITING WITH RUTH THOMPSONSPRING 2015 This class is for people who are interested in starting to write, and also for people who already write but would like to refocus their practice. Each meeting will focus on a different aspect of writing practice. We’ll talk about “morning pages” and keeping a notebook, experiment with writing… 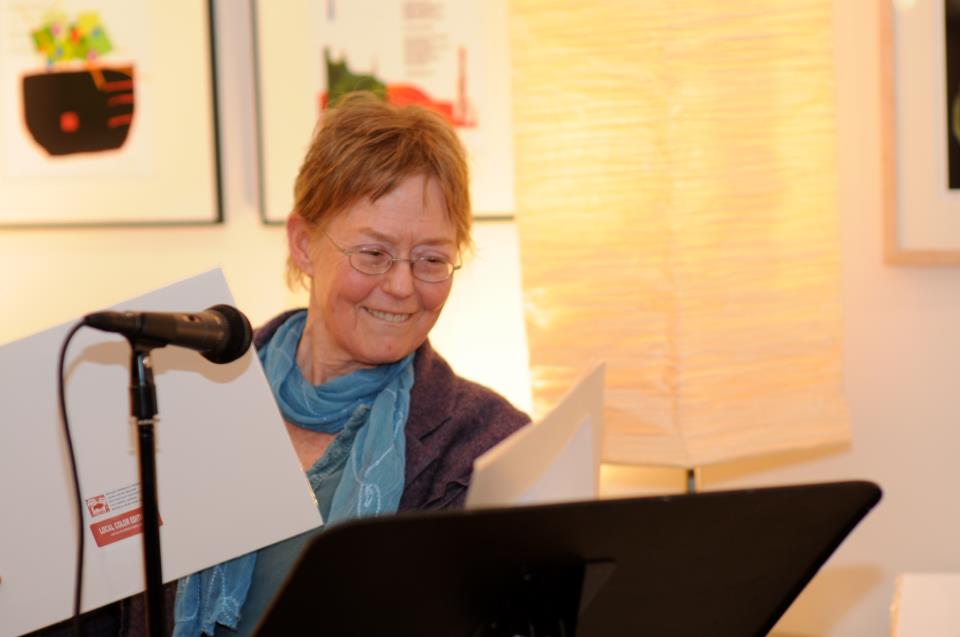 Here’s the video of a reading I gave on June 13th, 2015 at the Hilo Public Library, after teaching a writing class to a great group of writers. We were joined by more people from the community for the reading. Don Mitchell made and edited the video. It runs 20 minutes. The energy this day…